Girih generates quasiperiodic tilings with ten-fold rotational symmetry by recursively subdividing three shapes in the manner shown below. (Girih is the Persian word for “knot”, and is used to describe the interwoven, braid-like patterns of strapwork that decorate these tilings when they are used in Islamic architecture.) 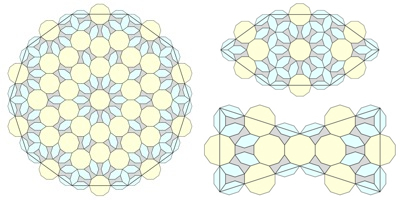 Starting with a single decagon, hexagon, or “bowtie”, each shape is replaced by a set of smaller versions of the same three figures. The process can be repeated indefinitely, giving rise to patterns with arbitrarily large numbers of tiles.

Although the replacement sets protrude across the boundaries of the original tiles, since the same shapes occur, symmetrically positioned, on all boundary lines, this never leads to any problems; the overlapping parts of the replacements for any two adjoining tiles are always identical.

Quasiperiodic tilings were only discovered in Western mathematics with the work of Roger Penrose in the 1970s, but this recursive construction (albeit with only a single level of recursion) is believed to underly some of the patterns of tiles found in a number of medieval Islamic buildings. In October 2008, I visited one example, the Masjid-e-Jameh in Esfahan, while on a trip to Iran.

Click on the applet for options. Redrawing the applet cycles between the three possible shapes for the initial tile, and also switches between omitting or including the girih strapwork on the design.

The applet is unable to display more than a couple of levels of recursion at a time, but a pre-computed animation that shows finer detail can be seen here (the file is about 20Mb). Also, the trailer on Vimeo for my novel Zendegi makes use of the same methods.

Reference: “Decagonal and Quasi-crystalline Tilings in Medieval Islamic Architecture” by Peter J. Lu and Paul J. Steinhardt, Science 315, 1106 (2007). This paper can be downloaded from here.